Notice: Trying to access array offset on value of type null in /var/www/vhosts/MediaWiki/includes/profiler/SectionProfiler.php on line 101
 SC_3 How do mosquito born diseases emerge and what are trends -

SC_3 How do mosquito born diseases emerge and what are trends

Mosquito-borne infections are among the most important new and emerging diseases globally and in Europe. Diseases like West Nile Fever, Chikungunya, Dengue, Usutu and Sindbis have appeared in Europe for the first time or re-emerged during the last decades. Today, especially globalization and climate change give opportunity for pathogens and vectors to colonize or re-establish in new areas.

Statistical correlation approaches such as species distribution modelling (SDM) are invaluable methods to predict disease transmission areas, which will help to identify disease outbreaks in the future. Here we connect important service functions from existing and largely complementary research infrastructures to run extensive bioclimatic modelling cycles for a series of pathogens and associated vector mosquitos on the Scandinavian shield. The Swedish LifeWatch portal (www.analysisportal.se) is used to provide high-quality biological data for mosquito species, while the Biodiversity Virtual e-Laboratory (www.biovel.eu) is used to access relevant environmental information and provide a series of ecological modelling algorithms. Finally, the European Grid Infrastructure (www.egi.eu) is used to execute a large number of analytical cycles for many species under different climate scenarios on a High Performance Computing Infrastructure. The use case shows how various research infrastructures support each other with complementary services to enable scalable and inter-disciplinary environmental research in the future.

The scientific vision of the project is to enable more efficient management of mosquito borne diseases, and nuisance mosquitoes. We expect that our efforts will lead to implementation of tools that can be used by researchers and authorities to predict the appearance of different mosquito species and outbreaks of associated diseases in real time. More specifically, we aim to develop

distribution models that better predict presence and abundance of mosquitoes based on landscape features, climate and weather, in order to run more cost efficient surveillance and (ii) models that more precisely predict potential outbreak areas of mosquito-borne diseases based on mosquito distribution and epidemiological parameters.

The technical vision of the project is to develop semi-automated workflows that import hydrological and biological data from the Swedish LifeWatch infrastructure (www.svenskalifewatch.se) into a collaborative modeling environment provided by the BioVeL portal ({+} http://portal.biovel.eu/+), with the possibility to outsource computational intense calculations to an HPC infrastructure such as the EGI (www.egi.eu).

The scientists involved in this case may only see the advantage of the RIs if there is a proper support service in place, which helps them to understand and use the services offered by the RIs. Without the support services, the researchers will be likely to develop and use their own and local solutions.

This is just a first suggestion for a 'basic scenario' that could be developed with the help of this science case: 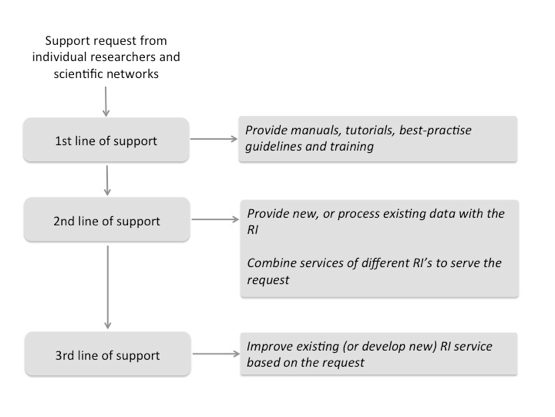 Component 1 – Swedish LifeWatch portal. The portal offers quality controlled biological and environmental data, which are useful to complement the researchers own data. The portal is operational and has a support function to help researchers find and access relevant data from Sweden (e.g. species occurrences, habitat and hydrological data).

Component 2 – BioVeL portal. The portal offers services for distributed data processing and analysis. This is particularly important because the Swedish/Nordic data need to be analyzed with global environmental variables, which are accessed from international databases (e.g. GBIF in Denmark, Openmodeller in Brazil). The portal offers stable services to access data and process these with a large number of ecological modeling algorithms. The portal is operational, but has currently no support budget to serve user requests. All support is done on voluntary base. The first line of support (see picture above) can certainly be offered. The second line depends on the request and may be offered on a case-by-case base, e.g. if the researchers want to import a new set of hydrological data layers into the analysis. The third line of support needs external funding, e.g. the scientists requested to add a new algorithm that handles presence/absence data into the analytical environment but the request was turned down due to missing resources.

Component 3 - EGI services for ecological niche modeling. The EGI currently has a number of popular BioVeL services deployed. These services are stable and frequently used for complex calculations across many species, climate scenarios, parameter setting, etc. For the current science case it is not necessary to add/ improve these services, but important to maintain the current service portfolio for ecological modeling.

1) Timeline. The science case started in February 2015. All RI services are established (Swedish LifeWatch for biological and hydrological data, BioVeL for global environmental data and algorithms, and EGI for HPC performance of the modeling services) and the researchers are analyzing their data. Some requests remain, e.g. adding one more niche modeling algorithm, adding specific hydrological layers. Also, the scientists still awaiting more biological data from their field surveys in Denmark, Germany, and Scandinavia. This will likely be completed until summer 2016. Thereafter the analysis will be finalized, but will also be repeated in regular intervals because the anlaysis is based on continuous monitoring of mosquitos in Northern Europe.

Expected output and evaluation of output