Notice: Trying to access array offset on value of type null in /var/www/vhosts/MediaWiki/includes/profiler/SectionProfiler.php on line 101
 Example 5: Using the Reference Model to explain the technology details of common services (WP4 practices) -

Descriptions of the Example

ENVRI working package 4 responses to deliver common services to support the constructions of ESFRI ENV RIs. Initially, the implementations focus on a

data access subsystem that supports integrated data discovery and access. In order to help ESFRI project managers, architects, and developers understand the design and implementation of these services, this example uses the terms and concepts from the Reference Model to explain the technology details of these services.

How to Use the Reference Model

We start with the semantic harmonisation service developed by the team in Task 4.2 [39]. The development is conducted to support the use case "Iceland Volcano Ash". The goal is to support scientists to analyse Iceland behaviour using data provided by different research infrastructures during a specific time period.

Defined by the Reference Model Science Viewpoint, the

semantic harmonization is a

behaviour belong to the

A data publication community interacts with a

data broker that act as intermediaries for access to data held within the data curation subsystem, as well as

semantic brokers for performing semantic interpretation. These brokers are responsible for verifying the agents making access requests and for validating those requests prior to sending them on to the relevant data curation service. These brokers can be interacted with directly via

virtual laboratories such as

experiment laboratories (for general interaction with data and processing services) and

semantic laboratories (by which the community can update semantic models associated with the research infrastructure).

data broker object intercedes between the data access subsystem and the data curation subsystem, collecting the computational functions required to negotiate data transfer and query requests directed at data curation services on behalf of some user. It is the responsibility of the data broker to validate all requests and to verify the identity and access privileges of agents making requests. It is not permitted for an outside agency or service to access the data stores within a research infrastructure by any means other than via a data broker.

experiment laboratory is created by a science gateway in order to allow researchers to interact with data held by a research infrastructure in order to achieve some scientific output.

semantic broker intercedes where queries within one semantic domain need to be translated into another to be able to interact with curated data. It also collects the functionality required to update the semantic models used by an infrastructure to describe data held within.

semantic laboratory is created by a science gateway in order to allow researchers to provide input on the interpretation of data gathered by a research infrastructure.

Please click the links to find out the specification details of these computational objects and the interactions between them.

The implementation conducted by WP4 T4.2 is an instantiation of the above computational objects specified in the Reference Model, that uses existing software components and developed approaches to enable integration and harmonization of data resources from cluster’s infrastructures and publication according unifying views.

Figure 2 depicts the computational components deployed in the prototype implementation. The service receives users’ requests via the SPARQL-endpoint. Then, it can automatically retrieve and integrate real measurement data collections from distributed data sources. The current prototype focuses on datasets from two different ESFRI projects:

The prototyped service uses two semantic models to provide mapping between representations: the RDF Data Cube vocabulary and the ENVRI vocabulary. The ENVRI vocabulary is derived from the OGC and ISO “Observations & Measurements” standard (O&M), SWEET and GeoSparql Vocabulary. 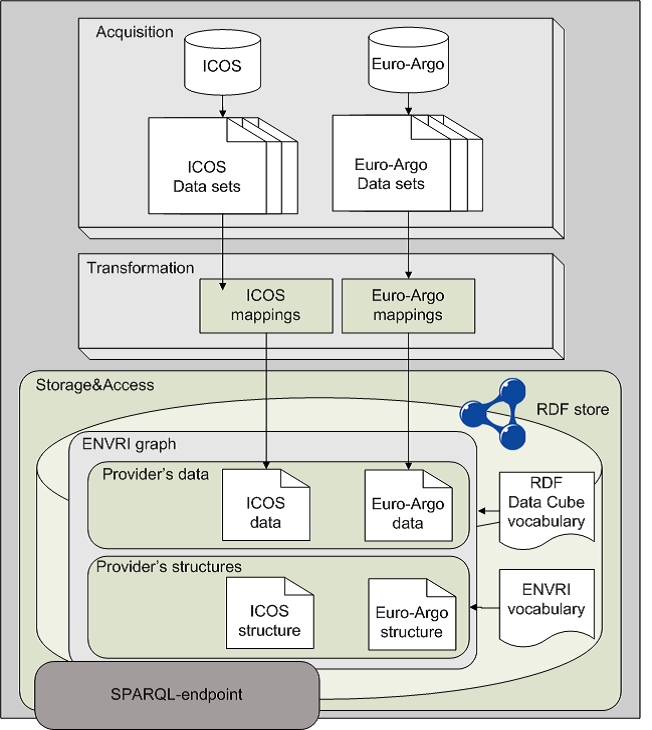 Table 1 provides the mapping between Reference Model computational objects and the deployed service components. Among them, the Transformation component serves as a data broker to negotiate data access with data stores within heterogeneous research infrastructures. An (instance of the) semantic broker is implemented using the RDF store technology which provides the semantic mappings and translations.

Table 1: Mapping of the deployed service components to the Reference Model computational objects

In the following, we explain the design of the information model of the semantic harmonisation service.