Notice: Trying to access array offset on value of type null in /var/www/vhosts/MediaWiki/includes/profiler/SectionProfiler.php on line 101
 How to read the Model (Computational Viewpoint) -

How to read the Model (Computational Viewpoint)

The encapsulation of computational objects (and interfaces) occurs at a conceptual level rather than the implementation level – it is perfectly admissible for the functions of a given object to be distributed across multiple computational resources in an implemented infrastructure, should that be supported by its architecture, if that distribution does not interfere with the ability to implement all of that object's interfaces (and thus behaviours). Likewise the functionalities of multiple objects can be gathered within a single implemented service, should that be desired.

The first-class entity of the CV is the computational object:

In diagrams, producer and consumer stream interfaces are linked using a double-arrow notation: the arrow-head points away from producers, towards consumers.
The decoration on the port boxes is not standard UML but is used to distinguish streaming interfaces.

As well as having interfaces by which to interact with other objects, some computational objects possess the right to create other computational objects; this is done typically to deploy transitory services or to demonstrate how an infrastructure might extend its functionality.

Some objects extend the functionality of other objects; these objects possess all the interfaces of the parent (usually in addition to some of their own) and can be created by the same source object if the capability exists.

Each interface on a computational object supports a certain type of interaction between objects, which determine the bindings that can be made between interfaces. A binding is simply an established connection between two or more interfaces in order to support a specific interaction between two or more computational objects. A client operational interface can be bound to any server operational interface that provides access to the functions that the client requires. Likewise a producer stream interface can be bound to any consumer stream interface that can consume the data produced by the former.

Once bound via their corresponding interfaces, two objects can invoke functions on one another to achieve some task (such as configuration of an instrument or establishment of a persistent data movement channel).

Primitive bindings can be established between any client/server pair or producer/consumer pair as appropriate. Compound bindings between three or more interfaces can be realised via the creation of binding objects, a special class of transitory computational object that can be used to coordinate complex interactions by providing primitive bindings to all required interfaces. 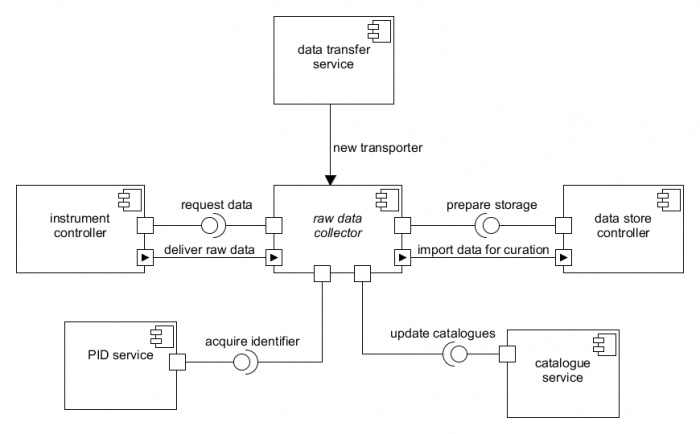 The use of binding objects removes the imperative to decompose complex interactions into sets of pairwise bindings between objects; this suits the level of abstraction at which the Model is targeted, given that the specific distribution of control between interacting objects is often idiosyncratic to different infrastructure architectures.

The names of binding objects are typically italicised in diagrams to better distinguish them from 'basic' computational objects.

In principle, all computational objects and their interfaces can be implemented as services or agents within a service-oriented architecture – this is not required however. Certain objects may be implemented by working groups or even individuals within the infrastructure organisation, bindings between their interfaces implemented by physical interactions, or otherwise human-oriented processes (such as sending data via email).

This possibility of this kind of 'human-driven' implementation of interactions between computational objects should be accounted for when considering the 'computational' viewpoint of a research infrastructure.